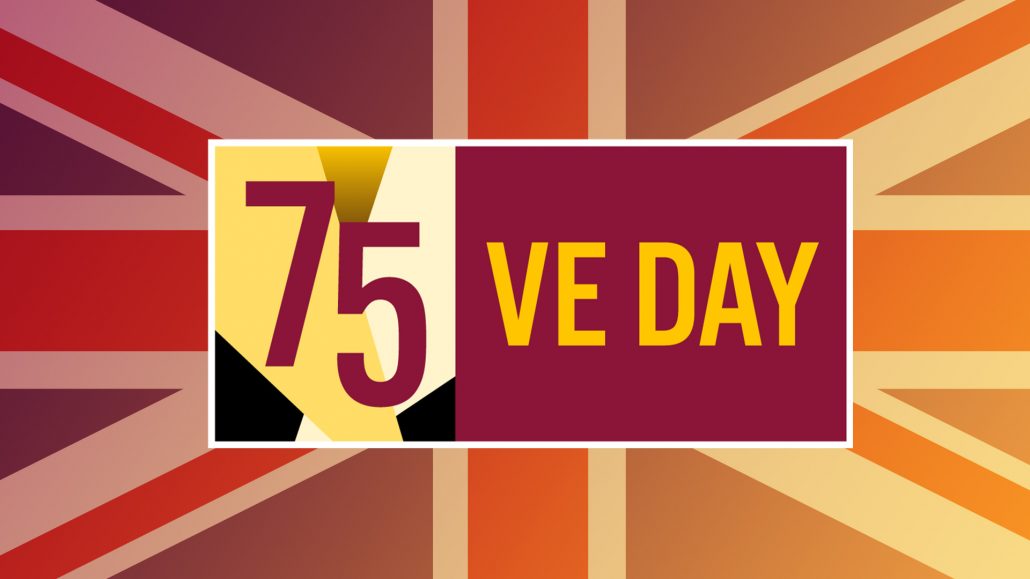 The coronavirus pandemic and lockdown will not stop us from celebrating the 75th Anniversary of Victory in Europe day.

If you want to hold your own celebration – at home or within safe distance neighbours in your road, then here are some resources to help you hold your own party.

A list of events have been created by the Government. For a full listing please click here

Culture Secretary Oliver Dowden said:
We owe an enormous debt of gratitude to the greatest generation that served in combat and on the home front during the Second World War.
Whilst we now need to celebrate VE 75 in our homes and on our doorsteps, rather than in parades and street parties, I know the nation will come together to mark this historic occasion.
In these difficult times, acts of remembrance are even more poignant and I am sure that millions will want to join me to remember and give thanks to those who gave so much to secure peace, freedom and prosperity in Europe.
To mark this historic occasion, Her Majesty The Queen will send a message to the nation at 9pm on BBC One, the exact moment her father, King George VI, gave a radio address in 1945.
His Royal Highness The Prince of Wales will read an extract from King George VI’s diary from 8 May 1945 which describes the day including The Royal Family’s iconic Buckingham Palace balcony appearances.
Members of The Royal Family, the Prime Minister and the Culture Secretary will take part in a series of video calls with Second World War veterans and those who served on the Home Front. First Minister of Wales Mark Drakeford will also host calls with veterans in Wales.   The official commemorations will begin at 11am with a national moment of remembrance and a two minute silence.
Other plans for the day include:
As part of special BBC programming, extracts from Sir Winston Churchill’s victory speech will recreate the moment peace in Europe was announced 75 years ago at 3pm and the Prime Minister will speak about the importance of VE Day.
The Archbishop of Canterbury will record a special reflection and moment of prayer for VE Day.
Her Majesty The Queen’s 9pm address to the nation will be followed by a national singalong of Dame Vera Lynn’s ‘We’ll Meet Again’. The public will be encouraged to open their doors and join in with this national moment of celebration.
The Department for Digital, Culture, Media and Sport has produced a template pack so that the public can hold a 1940s style afternoon tea party at home complete with homemade VE Day bunting, original recipes, games, and educational and creative activities for children.
NHS Volunteer Responders will be deployed to give a number of Second World War veterans a call and provide an opportunity to share their stories.
Historian and broadcaster Dan Snow will host history lessons for children from Monday 4 May. At 4pm on Monday, Wednesday and Friday, Dan will host a History Hit live on YouTube’s Timeline channel that will focus on a different aspect of the Second World War and aim to teach the public about the importance of VE Day.
The Government and Ancestry are working together to encourage the public to join together in commemorating VE Day by discovering their own connection to the Second World War. As part of this, all UK historical records available on ancestry.co.uk will be free for the public from Monday 4 May until Sunday 10 May, giving people the opportunity to uncover the personal stories of the Second World War and the roles their families played.
Legion Scotland and Poppyscotland will broadcast a virtual Service of Remembrance followed by online tributes from a range of performers.
The First Minister of Wales will host a video call to veterans.
A number of commemorative events will also take place across Northern Ireland.

We hope you have a wonderful Victory in Europe celebration wherever you are.

A Talk for Parents – Help your teenager bounce back from life’s hiccups...